This past week was definitely bananas. Mainly because it was the lead up to the awesome Chinese New Year Festival . Just a word to be said about Chinese New Year in London, it just happens to be the largest celebration in the world outside of China. Now that is impressive! 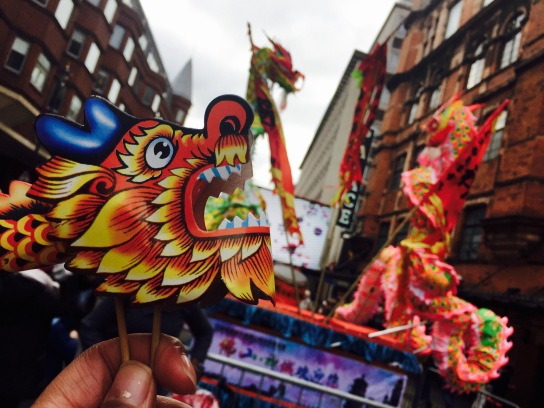 I started my week off with a trip to Abbey Road, Primrose Hill and the Camden Markets. Abbey Road is known for the infamous Beatles album that has gained plenty of critical acclaim and a plethora of awards and accolades. It was awesome being at Abbey Road. It almost felt like I had stepped upon a piece of history. Abbey Road the studio is very famous and frequented by the likes of extremely talented artists such as Kanye West, Adele and so many others. Walking on the exact crosswalk that Paul McCartney, John Lennon, Ringo Starr and George Harrison did made me feel like I had become immortalized in the same way they did. Well, maybe not immortalized, but it at least made me feel like I was on a path to greatness just as they were! I should also add that Abbey Road is a fully functioning street and intersection, and the cars don’t care and they certainly don’t stop for you to get your perfect photo opp. It was also funny because you can actually go on to the internet and view the live security camera, which faces Abbey Road and if you tell your loved ones to go on the website they can watch you cross it! Or you can just people watch as we did in my class when my teacher first told about the camera. LOL.

After Abbey Road we went to Primrose Hill, which you can see above. It’s beautiful and is home to one of the clearest views of central London. It was truly breathtaking. A sidenote is that Harry Styles of One Direction is rumoured to live over there, which wouldn’t be a surprise because it is home to some of the most affluent and wealthiest Londoners.

Later during the week I went to a really awesome club in Piccadilly Circus. Piccadilly Circus is a great area that’s actually only about 15 minutes from my flat. I love it there because of the fact that it makes me feel like I’m back in the US. It’s basically London’s equivalent to New York’s Times Square. There’s a lot of flashy lights and big advertising signs, and there’s always something going down around there! The club I went to had an amazing view of Piccadilly in it’s entirety:

The last thing I did this weekend was celebrate Chinese New Year. I had actually never been to Chinatown in London, so it was super exciting for me. I had joined the Facebook event to get updates a few weeks ago and was a little nervous that my roommates wouldn’t want to go because it was Valentine’s Day. I was way wrong, and we even met up with a few girls who live a couple floors down from us. Although it was cold, it was very fun and very cool. We saw different performances and ate some of the best food. Overall it was a great day and I’m happy I got to spend it with a bunch of great new friends! Except at one point Sara and Lauren literally got stuck in between the tube doors, which led to us accidentally leaving  Lucia behind because we couldn’t pull her in quick enough, because she was behind them not getting stuck in tube doors! It was okay though because Lucia got the memo and met us at the next stop that we had to get off at. Honestly, it was easily the funniest thing I have ever experienced. But mind you, no one said a damn thing when it happened! Londoners truly are a group of the most indifferent people I’ve ever met. They are not at all worried about anybody else LOL! They could really use a course in bystander intervention! Alas, I hope you enjoy this photo of Sara, Lauren and I being completely overjoyed to be celebrating the Year of the Monkey!

While this weekend was pretty chill and relaxed expect the next few weeks to pick up for me. I’m headed to Amsterdam and Bruges next weekend, so yes I’ll be in 2 countries within 3 days! Three days after I get back from Bruges I’ll head off to Rome for 5 days, come back to London for 2 days and then I’m off again to Barcelona for another 3 days. I’ll be drinking airborne, eating vitamin C tablets and drinking water constantly. Gotta keep moving and stay healthy. Catch ya next time!