So as most of you know on Saturday I went to Stonehenge & Bath. Stonehenge, if you don’t know, it’s this insane set up of rocks that have been in a certain position for seriously forever. By forever I literally mean thousands of years. By doing lab tests and other science-y things they were able to test the rocks and see how long the rocks have been here. It’s dated back to being setup between 3,000 and 2,000 B.C. BEFORE CHRIST. That is absolutely insane to me. I mean before christ, we’ve only be in A.D. for a couple thousands years! I was pretty excited to go just for the shear fact that the rocks are so old and it’s completely unknown to anyone for any reason of why or how the rocks got into the positions that they are in. I was a little skeptical though, about how much fun seeing a bunch of rocks would actually be. Turns out it was amazing. It was honestly so much fun, it felt crazy that I, in 2016, was close to something nearly 3,5000 years old. It really made me feel connected with the earth and made me think about how little we all are as people in general. We spend so much time thinking that the world rises and sets on our asses, but I realized how selfish that type of thinking is. Especially because there’s a strong belief (and facts to back it up) that Stonehenge is actually a calendar for the year. It’s also known to be directly connected to predicting and behaving (can rocks really even behave? lol) a special way during the winter and summer solstice.

The second place we went on the trip was Bath. Bath was insane, it was one of the coolest places I’ve ever been. I was also skeptical about this one because I was like, well what the heck could be so cool about a bath? I didn’t realize what I was getting myself into. It ended up being this unbelievable Roman Bath house from nearly 2,000 years ago. It was a very important city called Aquae Sulis. The bath house was in this beautiful, historic, elegant city that had amazing architecture! I can’t put into words how amazing it was…it’s best if I just post some pictures. 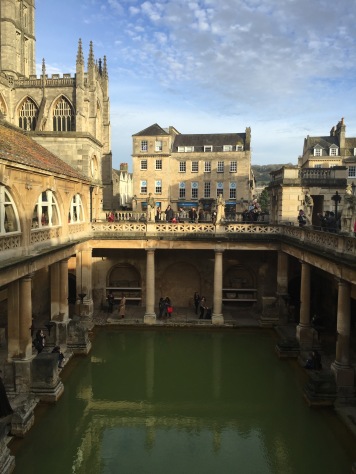 A view of the bath house & the original BATH

It was amazing! The photo on the left is a whole view of the bath house as it has been for the past couple thousand years and that’s my hand touching 2,000 YEAR OLD ROCK from Sulis Minerva’s Temple!!!! Sulis Minerva was the particular goddess that they worshipped in the bath house to bring them good fortune and nourishment.

This is a picture of the Royal Crescent. The Royal Crescent is one of the most famous and greatest Gregorian architectural buildings in the United Kingdom as a whole. It was unbelievable. Obviously it’s one of those places like Rittenhouse Square or the Upper East Side, so it costs millions to live their now, but it was still very cool.

As you can see, I’m enjoying myself. My next post is going to be about my first fish and chips experience as well as budgeting and homesickness.

Catch ya later, on travels with Tee!