Traveling to Chiang Mai and celebrating Loy Krathong and Yee Peng should be on everyone’s bucket list.

Loy Krathong and Yee Peng are actually two festivals that are celebrated together under the name of Loy Krathong. Loy Krathong is a festival celebrated all over Thailand, while Yee Peng is a Lanna festival that’s native to Northern Thailand. The two celebrations are held on the full moon of the 12th month of the Thai calendar, which usually falls around mid-November, but exact dates can vary from year to year.

Loy Krathong –  In Thai, ‘loy’ means float and ‘krathong’ means floating object made from banana trunk. During Loy Krathong, people create personalized krathongs by decorating them with flowers, candles, and incense with the intention to set them afloat into a river to honor the river goddess. Sending the krathong down the river is symbolic of washing away misfortunes, washing away the year’s past sins and wishing for good fortune in the upcoming lunar year.

Yee Peng – Is responsible for the infamous images that show hundreds of lanterns floating into the night sky in Chiang Mai. The lanterns give an orange-yellow hue that makes the dark sky light up and look like never before. The letting off of lanterns symbolizes the same notions of letting go of past misfortunes and wishing for good fortune.

Many establishments will host events with live music, buffet dinners, drinks, lantern lighting and krathong send-offs for prices ranging from 400 baht – 3000 baht. If you’re interested in participating in these festivities the best thing to do is go on Facebook, search “Loy Krathong,” and browse the events that are happening. 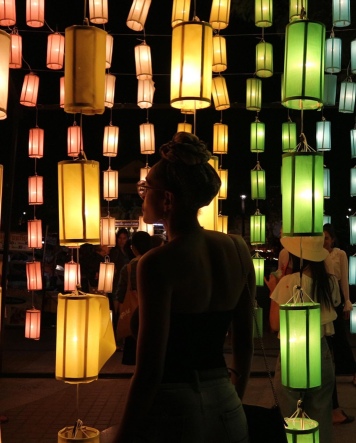 If you’d just like to see some of the lights and let off a few lanterns head to:

Tha Pae Gate – where you can see beautiful lantern installations and live performances.

Nawarat Bridge – this is the most popular place where people gather to let off lanterns.

Iron Bridge – another space to let off lanterns and get a great view of the sky.

Night Bazaar – where you can get the best street view of the lanterns drifting into the night sky.

Temples – all the temples will have light installations and ceremonies where you can make merit, express your good deeds, and wish for good fortune. If you plan to visit temples make sure you have dressed appropriately with covered shoulders and knees.

This year there was a rule that prohibited people from letting off lanterns, which caused confusion about when and where people could let their lanterns go. On the first night of Loy Krathong, thousands of people let their lanterns off, but on the second night, there were police officers walking around and telling people not to let them off. It was a sad sight to see the regulation of lanterns, but many people accepted the rule. At around 10’clock, just when everyone had lost all hope, the no-lantern-ban seemed to have been magically lifted. People began to flock to the streets, the crowd began to swell and the sky was yet again filled with hundreds of lanterns.

-The lanterns can be hard to maneuver because you have to use fire to light them, and the fire needs to create enough gas within the lantern to give it the ability to float. I have seen many people almost get hurt because their lantern caught on fire. I suggest finding a partner to help light your lantern. Two sets of hands are better than one.

–Carry your own lighter. Nothing is more annoying than someone having to constantly borrow a lighter from the people around them.

-When you let your lantern go try to let it off into open air space. I’ve seen plenty of lanterns fly directly into power lines, trees, and rooftops. This is exceedingly dangerous because the lanterns have an open flame.

Happy Loy Krathong, enjoy the celebrations, embrace the massive crowds, be safe and if nothing else, enjoy the spectacular view.